There are six things that the LORD strongly dislikes, seven that are an abomination to him: haughty eyes, a lying tongue, and hands that shed innocent blood, a heart that devises wicked plans, feet that make haste to run to evil, a false witness who breathes out lies, and one who sows discord among brothers.[Proverbs 6:16–19]


Opening on the front foot here, The Conservative Party are a bunch of religious zealots that haven’t bothered to read-up on the recent failed attempts by similar ‘morally based’ political parties in New Zealand, that have tanked.


The Conservatives membership base, like their candidate for the Christchurch East by-election (Bi election?) Leighton Baker largely comes from the ashes of these failed parties.


So who is Leighton Baker, builder by day and moral crusader in his spare time?


In cases like this Google is a true ‘blessing’.


This is Mr Baker’s god-bothering rant/submission to Parliament against same-sex marriage.


That’s right Mr Baker was then with the Kiwi Party not so long ago.


So Leighton Baker is a ‘template’ for what a Conservative Party Candidate should be.


There is only one reason why the Conservative Party exists in the first place.


His name is Colin Craig and he has a lot of money.


The Conservatives are the vanity project and the public voice for millionaire Craig.


Oh yeah silly of me to leave out Mr Yahweh from Mr Craig’s eclectic mix.


He knows to be tainted as a ‘Christian Party’ in New Zealand is the equivalent of endorsing Graham Capill as deputy leader.


So let me spell this out clearly for the punters, just to piss them off: The Conservative Party in New Zealand is a Christian political front-group.


So why not be brave, honest enough to say so Mr Craig?
Posted by Canterbury Atheists at 10:46 AM No comments:

Which Countries still use the Imperial Unit System in 2013?

Here's the reason why everyone else uses Metric.


Trivia: N.Z started the Metrication process in 1969 and it was officially completed at the end of 1976.

Posted by Canterbury Atheists at 8:39 AM No comments:

Despite the list of countries still embracing communism being in single figures there is still a yearning in some quarters for the good old days Maxist-Lennism.


Leading the charge to rid the planet of the evils of some people making more money than others is none other than Pope Francis.


I personally don’t give a flying-fuck what a bloke with a chicks name, whose only meaningful ‘job’ is to cover up the global paedophile ring he heads, has to say.


But the sheeple of the Catholic Church can’t simply dismiss the words of a man they consider Gods emissary on Earth.


Worryingly New Zealand’s own Minister of Finance is a devotee of Pope Francis’s and Bill English has a litter of kids to prove it.


PS: The ‘good oil’ is this is Pope F’s favourite song.
Posted by Canterbury Atheists at 12:39 PM No comments:

Good on the Australian Government undertaking an enquiry into Clerical Abuse on Children in that country.


The results of this just released are damning for the Catholic Church.


To quote the report:


"The levels of abuse in the Catholic Church are strikingly out of proportion with any other church, and that is the reality,"


"a reluctance to acknowledge and accept responsibility for the Catholic Church's institutional failure to respond appropriately to allegations of criminal child abuse".


"Rather than being instrumental in exposing the issue and the extent of the problem, the Catholic Church in Victoria minimalised and trivialised the problem, contributed to abuse not being disclosed and ensured the community remained uninformed”


What this ground-breaking report has done, is finally put a figure on the rate of abuse amongst Catholic Clergy versus any other ‘man of the cloth’ (in Australia)


Pity they couldn’t recommend the rotten edifice be closed with immediate effect.
Posted by Canterbury Atheists at 2:57 PM 2 comments: 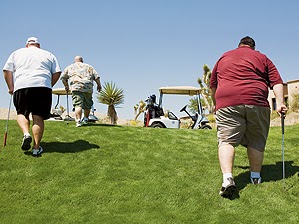 Golf is a game that bores me to tears: ponderously slow and archaic.


The terms ponderous and archaic are a nice segway into my two main criticisms of the game.


I am loathed to use the word sport here in the same sentence as golf.


How can it be a sport when we see morbidly obese golfers puffing away on fags?


And these are the pros!


Just, beer bellied blokes with double-barrelled names dressing like extras in a tacky rap music video.
If golf is a sport then so is Play Station!


Golf is not a fucking sport.


Golf is a game for the indolent rich, elderly and physically infirmed to allow them time to compare bank balances, European vehicles and swap stock-market tips.


Golf is played by those that have lost the will to live and don’t have, never had, enough testosterone pumping through their veins to play a real man’s sport.


Golf is Nature’s way of Saying “It’s Time to Die”.

Posted by Canterbury Atheists at 9:59 AM No comments:

Labels: Golf is not a sport

I have been on a radical get fit program.


The offspring of fat parents are virtually all obese, in-line for ill-health.


According to my failing eyesight there is no such thing as thin parents and fat kids.


Why are we beating about the fucking bush here peoples?


If I was to repeatedly inject a substance into my children’s bodies that would reduce their lifespans: I would be arrested and the children taken into care.


Why do we allow parents who have no respect for their own health to inflict their own detrimental lifestyles on to their children?


We don’t allow parents to shove a smoke in the gob of their kids, now do we?


But it’s fine to serve KFC and Maccers to a 3 year old breakfast, lunch and dinner!


You can feed a baby Coke and nothing will happen.


In closing remember my mantra…

Posted by Canterbury Atheists at 6:52 PM No comments:

Project Spade, began in October 2010 when undercover online officers from Canada made contact with a local sicko who was sharing graphic images of children being sexually abused.


Little surprise that front and centre amongst these vile pedos were Catholic Priests.


Incidentally another four pedos caught in this bust were listed as pastors.


You do the maths, priests are way over represented.


I suppose it’s a blessing they don’t have children of their own.

Yet again, The Catholic Church and is exposed as being little more than a front for pedophilia.


Surely there is a case to outright banning priests?
Posted by Canterbury Atheists at 1:26 PM No comments:

N.Z Parents are not being told by doctors “Your Kid is a Slob” so not to offend them!

More than 80 per cent of parents with overweight children in New Zealand do not know they are overweight and health professionals hold back from telling them because of the risk of getting parents' backs up, said Rachael Taylor from Otago University's School of Medicine.


It’s only the parents of the extremely overweight that are being are told if there is a problem.


All these parents of fatties must be fucking stupid, unfit to have children in the first place, if they can’t even see their own offspring are fat.


My bet is most of these parents are overweight themselves.


The reason the child is obese in the first place is because the whole family has an unhealthy lifestyle.


"There is a huge sensitivity this will trigger an epidemic of anorexia, and there is no doubt it is a sensitive issue, but it is much-needed information." say the officials as an excuse for failing to tell parents the bleeding obvious.


Unless the whole country undergoes a famine and KFC and Burger King shut their doors, these kids stand about as much chance of striking first division lotto, than developing anorexia after being told to “eat healthy and exercise more”.


PC scared Kiwi clinicians found parents responded positively to the use of a traffic-light system, where children were plotted as either green (OK) orange (some issues) or red (definite health issues).


These parents don’t need a doctor they need an optician!
Oh yeah, some bathroom scales and an odd mirror around the house would be a fitting prescription.


And the result of this Otago study came to the predictable 'namby pampy' conclusion: the Government should tax fatty foods, labelling etc.


In other words: the broad brush approach to penalise all New Zealanders for the inability of others to eat well and exercise.


If Government control is what academics are advocating then a far more effective ‘blunt force’ method is to charge parents of fat children with dereliction.


In the ‘red’ cases drag parents off to court and give them say six months to get their child into shape or risk losing him or her.


Posted by Canterbury Atheists at 7:59 AM 2 comments:

More fool those who want to pump carcinogenic chemicals into their system in the name of ‘individual pursuit’ and ‘temporary fashion’.


The inks used in tattoos contain hazardous substances such as cobalt, benzoapyrene and mercury.


Small particles called nanoparticles from these chemicals, enter the bloodstream and accumulate in organs such as the spleen and kidneys, reducing their function.


People can make their own choices.


Pumping carcinogenic chemicals through your veins to attract fickle and fleeting attention doesn’t seem the brightest thing to do.

Posted by Canterbury Atheists at 1:05 PM No comments: