It’s not a good week to be an animal of any kind in Nepal, particularly Buffalo's – 200,000 of them alone, are due to be slaughtered.

Add to the 'death-list' pigs, goats, chickens and pigeons and anything else the superstitious Nepalese can get their bloodied hands-on.

In case you missed it, the world’s largest animal sacrifice The Gadhimai Festival, which happens once every five years, is taking place this week in Bariyapur southern Nepal.

The highlight of the festival is the ritual slaughters of more than a quarter of a million animals for Gadhimai - a goddess of power.

Participants believe that animal sacrifices for the Hindu goddess Gadhimai will end evil and bring prosperity.

The fact the festival has been going for centuries without any apparent abatement to evil around the world and Nepal remains to this day one of the poorest countries in the world – has escaped devotees.
Posted by Canterbury Atheists at 1:56 PM No comments:

Calling all Atheist’s to get out and Support The Church of Scientology!

It hasn’t been a good few months for the followers of b-grade sci-fi writer L.Ron Hubbard.

First a French Court found The Church of Scientology had defrauded its members and this week across the Tasman we have a South Australian MP calling for an enquiry in Canberra.

The Australian Senator Xenophon (no he's not a distant relation to the evil space-overlord) said he had received correspondence from former members of Scientology implicated the organisation in a range of crimes, including forced imprisonment, coerced abortions, embezzlement of church funds, physical violence, intimidation and blackmail.

Then Scientology's chief spokesman, Tommy Davis (evidently Tom seems a popular name for those who believe in Alien occupations of earth and the liberal use of very large numbers) stormed out of a television interview with Martin Bashir in a rage befitting a person of a far lower operating level [refer You-Tube video above]

The thetans must well and truly be enveloping the COS hierarchy producing itchy-welts that won’t go away – even with the most thorough auditing and creams.

And I for one feel sorry for them!

That’s right I feel sorry for The Church of Scientology.

The major thing that COS does wrong and pisses the public-off - is to charge above market rates for their load of superstition.

The ‘Johnny come lately’ COS also has the audacity to believe in invisible alien life forms as opposed to the traditional invisible deities worshipped for millennia – this too brings it’s detractors.

Having a f*ck-knuckle like Tom Cruise as a poster boy & a propensity to act like the East German Secret-Service can’t have helped their cause either.

So if the media and state-authorities around the globe are going to target COS and portray them as a bogus religion - we must place the same burden of proof on all their competitors.

The Islamic religion believes their messiah split the moon in two.

The Christian religion believes the earth was made in six days.

Are these any more credible propositions than Xenu?

As I have just stated what pisses the public off (atheists and theists alike) is the way they function and not their actual beliefs – which are a bunch of expensive crap as opposed to the discounted version available at other corner churches - except of course Destiny up-in Auckland.

My message to COS – believe you me they troll the internet looking for detractors and insignificant dissertations such as this - is to start offering a 2 for 1 discount and run sale to coincide with that false-holiday the other pretenders call Christmas.

PS: On the right of this blog are the results of the recent month long poll I ran to find-out the weirdest religion. Guess who won?
Posted by Canterbury Atheists at 10:19 AM No comments:

It would seem to most that the religiously motivated crime such as that allegedly perpetrated in Blenheim by three self-confessed ‘Christian Activists’ (September 2008) would by rights be deemed an act of sabotage, under newly drafted post Sept 11th terrorism laws, and the suspects immediately imprisoned awaiting trial.
But the three activists, Adrian Leason, Fr Peter Murnane and Sam Land who allegedly deflated the protective dome covering a satellite dish at Waihopai last year have laughingly been charged with little more than intentional damage and burglary – rather than sabotage.
They now face a maximum of 6 years in jail rather than 14 had the charges been made under The Terrorism Act.
A trial is scheduled for The Wellington High Court in March next year.
New Zealand obviously is a soft-option for those like Ploughshares Aotearoa group behind the attack who want to see the Taliban returned to power in Afghanistan, Saddam Husseins old government reinstated in Iraq, and are willing to attack the equipment of those trying to bring peace and security to the peoples of these embattled countries.
To re-fresh your memory immediately after allegedly setting the Kiwi taxpayer back a million bucks with their wanton vandalism, the trio built a shrine and knelt in prayer to remember the people killed by United States military activity. Hardly surprisingly no prayers appeared to have been offered at the time to the victims of al-Qaeda or the despotic regimes that New Zealand and other countries are spilling blood to remove.
All three ‘Christian Activists’ facing trial have long histories of Anti-American protests. 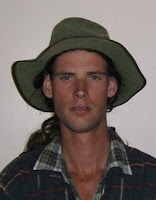 Sam Land (above) was arrested in a similar attack at Pine Gap in Australia (2006).
All three are staunch Catholics and in accordance with their Churches teachings they want to see an end to The Jewish State of Israel. 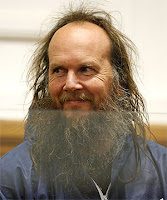 Adrian Leason (above) hatred of The Jewish State and went as far as organising a pro-Hamas pro-Palestine protest in Wellington (January 2009 - post the base attack) and for theatrical effect dressing his six year old daughter up in bloodied bandages, like so. 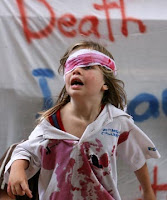 After looking at the despicable way he manipulated his own young-child for his own political gain you’ll be amazed to learn Leason was in-fact at one stage seen fit to be a senior Child Youth and Family adviser - at National Office level!
Father Murnane was a flat-mate of convicted (in absentia) Islamic terrorist Ahmed Zaoui and threw blood all over the Wellington U.S Consulate office in 2003.
Despite being expressly forbidden by the Courts in Blenheim last year for those charged with the attack not to mix in each other company – guess who turned up in his bloodied bandages to have his chance to preach anti-Semitism at Leason’s protest? 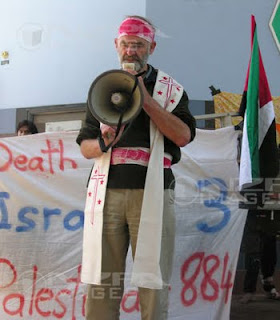 That’s right it’s good old Friar Murnane getting stuck into those ‘Christ Killers’.
Footnote: Just to emphasis the deep-seated Anti-Jewish streak amongst the protesters in Wellington later that day another Catholic Priest desecrated an Israeli war memorial.
As I have stated before had the person who attacked the Waihopai Base been Mullah Mohammed Omar rather than a Catholic Friar Murnane - Police Prosecutors would view this differently.
Had they all bowed to Mecca after the attack rather than knelling and praying to a Christian god, we would be seeing the first religiously inspired terrorist trial in March rather than these watered-down civil charges.
Hopefully by the end of March, Leasons brat will really have something to cry about.
Posted by Canterbury Atheists at 8:40 PM 2 comments:

WHAT HAPPENS TO THE SOULS IN THE CASE OF BRAIN TRANSPLANTS?

Jesus was an Ugly Blackman

PS: I am getting better with my crappy Windows Movie Maker - even if I do say so myself.
Posted by Canterbury Atheists at 1:23 PM No comments: