I got invited to a BBQ the other day.


Technically it was my wife’s do.


So apart from the hosts I didn’t know another soul.


One of the other couples arrived on their Harley so I started to make idle chatter with the bloke and the subject of mufflers arose.


I got to hear the argument ‘loud mufflers save lives’.


The premise has a certain logic to it.


But it’s simply wrong, not born-out in any independent study I could locate and ignores the fact bad drivers crash into other cars at the same rate as they crash into motorbikes.


Ignores physics: sound travels behind a bike not in front of it.


How many accidents happen when a vehicle driving on an open highway drives up the arse of another one moving at speed?


Then there’s the ‘herd of elephants in the room’ if you are in-fact a safety conscious motorcyclist?
Not an attention seeking one, driven by fashion and the desire to be a weekend rebel.


Daytime running lights will make you more visible to other motorists.


There are studies (Scandinavia, Denmark etc) that prove this.


So if you want to put loud pipes on your bike for safety reasons and not just exhibiting a form of attention deficit syndrome – then by rights it follows you will ride the roads in a fluro yellow vest or similar with headlights blazing day and night, eh?


As we all know Harley Davidson owners see themselves as ‘real men’ and wouldn’t be seen dead in poofy fluro, nor adopting the effeminate habit of riding with lights on during the day.


Yet these very same Harley owners are perfectly happy creating noise pollution under the guise of personal safety!


Last but not least as a safety conscious motorcycle owner what about buying a motorbike that has the most favourable specs for handling, suspension and brakes etc?


Get say a sports bike like a Ducati or Kawasaki which would ‘kill’ a heavy Harley in any performance, handling comparison.


More importantly the likes of a Ducati, Yamaha, BMW make safer motorcycles better suited to N.Z roads.
That’s probably why the owners of these motorbikes don’t see it as necessary to employ noisy exhausts.

Posted by Canterbury Atheists at 11:13 AM 4 comments: 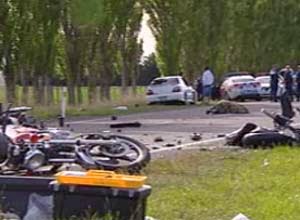 I actually like motorcycles, prefer motorbike racing to car racing.


Then I had a ‘life changing event’ in my early twenties when I thought I was going to die on the CB350.


But god (tongue firmly in cheek) intervened, prevented my premature demise, but from that day forward I was sworn-off motorbikes.


On a good-day and the right road it’s hard to beat that ‘alive’ feeling you get on a motorbike.


The fact still remains (Transport NZ Crash Facts 2012) you are 22 times more likely to be involved in a fatal or injury crash on a motor bike than in a car over the same distance.


Sure some of the disproportionate risk hopping on a bike can be put down to other motorists crashing into innocent riders.


The stats say approx. one third.


Regardless of who is to blame that doesn’t diminish the relative danger riding a motorbike nor those stark stats.


Bad drivers crash into other cars as well.


What is apparent from the accident figures are the high number of number + 40 y.o’s involved in accidents.


More than the entire age group 15 to 30 who, let’s not forget are notorious for their dangerous driving habits behind the wheel.


This difference is probably down to the type of bikes both demographics were adopting.


Teens and twenties come off their scooters, low cc bikes during the week and the ‘mid-life crisis’ rider their 750 plus bikes over weekends.


The difference between predominately low speed accidents in urban environments for junior versus high speed ones for ‘the old man’ blatting around the countryside.


Regardless of engine size, demographics there’s no escaping a staggering 27 per cent of motorbike riders involved in accidents were either drunk or drugged!


36 per cent of motorcyclist crashes involve a bike with a cc rating over 750cc.


That’s way disproportionate to the numbers.


When you ‘crunch’ these stats it’s obvious the mid-life weekend warriors Harley owner has a risk-factor versus driving a car the same distance well above that 22 times average.


By my maths it’s 40 times or more, but it’s fair to say I failed school cert mathematics.


Freedom comes at a price.


One I’m not willing to pay.
Posted by Canterbury Atheists at 9:30 AM No comments: