You were the first apart from Farid, Abdu and then there was the little-matter of…….

In Egypt there is a large religious stigma attached to women being virgins on their wedding night.

So what is a less-than-chaste girl to do in order to hide her dirty secret from her perspective husband, on those conservative sands of Africa?

How does one hide that night of debauchery spent between the sheets with Farid at a seedy motel in Alexandria.

Then there was the little matter of what went-on on the back seat in Abdu’s Mercedes.

Fret not, don’t get tears on your black wedding dress - help is at hand.

For a measly 15 bucks you can purchase a ‘virginity faking-device’ made in China.

He’ll be none the wiser about Farid & Abdu, so why tell him about the drunken night with the local football team either?

There is only one problem - getting your soiled-paws on one these virginity faking-device has got hard (pun intended).

Islamic scholars with the support of The Egyptian Parliament are to blame for this lack of supply.

They have dubbed the device as 'evil' with the potential to spread vice in society (read: adults enjoying pre-marital sex & making individual choices)

They want the importers of the product punished according to Sharia law.

And what is the punishment to be meted-out the importers and re-sellers of these 'evil' virginity-fakers?

That one-punishment that fits all crimes under 'The Religion of Peace'.


Posted by Canterbury Atheists at 3:52 PM No comments:

Sticks and Stones may break my bones but names….. 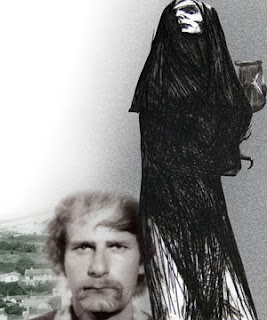 I recall a chapter of the fascinating book ‘Freakonomics’ which studied the correlation between Christian names and social status. The authors of Freakonomics (Levitt is a statistician & Dunbar a journo) looked at the statistical correlation between an individuals Christian-name and their chances at success in life and conversely the chances of ending-up in the slammer or in the poor-house. Cultural aberrations.

The premise was 'does a name matter'?

A different sort of social-study on the effect a Christian name can have was undertaken in the U.K recently by Warner Home Videos which polled 2000 Brits asking-them for their Scariest Christian Name.

The results of which indicate perception it appears - is everything.

Along with my own reasoning as to why these names were likely picked [in brackets] The Top 10 list of Superstitious Names coming-out of Britain were:

The heavy influence movies have in deciding ‘what is scary name?’ is evident, although perhaps because it was a movie company behind the polling may have influenced the thinking of those answering?

The likely-fact a movie can influence an individuals perception to this degree is a frightening enough realisation in itself and an indictment on the gullibility of people.

There also appears to be a sad-lack of historic references in the list. Myra and Adolf being the only non-fictional characters [NB: The jury is out on Judas Iscariot]

If one were to pick an evil-doer from Greek mythology surely Pandora was never a A-List evil-doer like say Medusa? For what it' worth I can't ever remember meeting a Pandora nor a Medusa anyway.

So it’s interesting stuff indeed delving into the human psyche and how a name can be deemed inherently 'bad' without any substantive-evidence to back it-up or at best a throw-away reference to a 25 year-old movie.

Moving from this theme, the question I would like to pose is: are all Otago babies named David instantly damned, or whisked silently from their cradles at Dunedin Hospital at midnight by German aupairs resembling shot-putters?

Given what we know constitutes a scary name I’m also going to suggest that Hollywood is about to curse the name Leslie with the imminent release of a film about Manson Family member Leslie Van Houten (trailer below) The title is enough to do-the-trick on it’s own.

PS: As a side-issue Michael Laws has dubbed the term 'Silly First Name Syndrome' correlating the high number of New Zealand criminals & victims of crime (often their family) who have weird Christian names (google it) The ODT also highlighted this synergy here.
Posted by Canterbury Atheists at 3:37 PM 1 comment:

PS: Oh yeah, what’s that on the Pontiffs left cheek? Love-bite from a tryst with an errant altar-boy? Don’t tell me it’s a beauty mark?
Posted by Canterbury Atheists at 8:52 AM No comments: 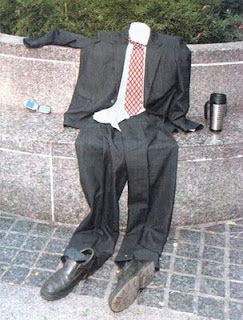 An enterprising atheist in New Hampshire has started a unique-service for the Christians in his community.

The rationale is perfectly sound.

What happens to Fido the mutt,Mittens the moggy when their masters are suddenly spirited-away to the heavens?

It’s not as if God is going to post a You-Tube announcing the event so you can open 200 cans of jelly-meat in advance, is it?

So Christians face their beloved pets becoming tasty-treats for the heathen masses left roaming the planet or even worse – letting them be adopted by a Hindu family. 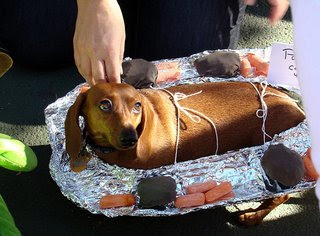 The dire consequences of abandoning loved-family members whilst you waltz-around in the bosom of your savior up-in-the clouds - doesn’t bear thinking-about.

In the event of rapture those that have committed their lives to Jesus Christ and love their pets, can now pre-book an Atheist to come around and take care of their soulless beast.

I wonder who has the New Zealand franchise? 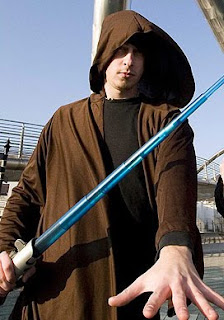 I have briefly come-out of self-imposed hibernation, to highlight this ridiculous & highly amusing pantomime currently going-on in Wales (when you read the article the term ‘pantomime’ seems to be a perfect description)

The guy in the photo is Welshman, Daniel Jones, who appears for all intents & purposes , to be on his way to a fancy-dress do - dressed as Luke Skywalker.

First appearances can be misleading.

Danny ‘boy’ takes this Jedi Knight thing seriously, and is the self-appointed leader of The Jedi Church of U.K.

Given his lofty status I was hoping to find some confirmation he could use ‘the force’ to move things telepathically, like ripping the clothes-off desirable women without being detected.

But enough of this jest.

The Jedi Church considers itself as a bona-fide religion with a worldwide membership of 500,000. In the 2001 Census, 390,000 Englishmen ticked- the-box saying they were Jedi.

So when Jedi Jones got tossed out of his local Tesco supermarket last-week for wearing his hood, it doesn’t take much to guess his reaction.

He went bleating to the media crying “Religious discrimination”.

In-what was a masterpiece of rebuttal the spokesperson for Tesco, in 50 words of less, had this to say…..
“We would ask Jedi to remove hoods. Obi-Wan Kenobi, Yoda and Luke Skywalker all went hoodless without going to the Dark Side.”.
“If Jedi Knights wear their hoods, they may miss our specials”.
But here’s 'the bully'
What happened if Daniel, who by the way also employs the Jedi name Morda Hahol, had of entered the supermarket in a traditional turban or other so-called religious regalia?
Say like this fella, from the Russian Orthodox Church. 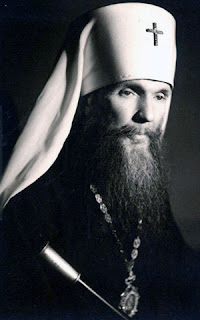 Similarly, would supermarket-security descended on a woman wearing Muslim headdress?
To the best of my knowledge Jedi's are not renowned for acts of indiscriminate violence - tubeway attacks, hijackings etc.
Tesco’s have probably dug them-selves a hole on this one, but one major question remains unanswered.
“When he was initially confronted by Tescos staff, why didn’t Morda Hahol simply use his mind control powers?”.
Posted by Canterbury Atheists at 10:20 AM No comments: