Technically The South Island is not part of Aotearoa.

Intrigued at the increasing usage of Aotearoa as a pre-European Maori word meaning (the North and South Islands of) New Zealand, recently I spent a few hours in the Christchurch library researching the topic. Oral tradition makes research of this nature never perfect, opens up many contentions but here’s my best effort.


Prior to European settlement there was no unified New Zealand, for want of a better term.


There were numerous Maori tribes, sub tribes in the North Island and South Islands, Stewart Island and Chathams.


There was, still remains geographic Maori names for all the islands, rivers, mountains which anyone can google up.


However it is fanciful, modern invention to suggest a 17th century Maori would have called his wider environment Aotearoa, encompassing all of what we now know as New Zealand.


A pre-European Maori living in say Southland mostly lived an isolated life, had little interaction with other tribes other than those bordering his village.


He or she would have no comprehension as to the scope of Aotearoa a united union of all Maori.


Few would have say called the South Island Te Waipounamu or other variants simply because they had no reason to think of the place other than it being the territory of ‘Tribe X’ or ‘Tribe Y’.


Even the word Aotearoa, the widely used native term for New Zealand’ is somewhat ambiguous as to its meaning.


It’s all open to interpretation.


Aotearoa was therefore the traditional term for the North Island being the landing point of Kupe.


The most likely vernacular origins of the word Aotearoa we have adopted comes via English historians, commentators who made their own interpretations as to the lands being described to them to encompass the South Island.


Unless every book I read is wrong in reality there was no pre-European word for New Zealand as a whole as we know it today.


The traditional ‘myth’ of Kupe discovering Aotearoa is similarly varied to say the least, isolated to North Island tribes and then passed on-to South Island tribes via northern interaction.


There was/is no one unified Maori ‘discovery' or indeed 'creation' story which just further muddies the water.


In summary: Technically The South Island was never a part of what was loosely called Aotearoa or Kupe’s legendary discovery of what we now call New Zealand. For all intense and purposes Kupe never knew the South Island existed in the same fashion European explorers reported only what they found. As Maori populations expanded so did their legends e.g. Maui.

I was under the impression Sunday School was a time to indoctrinate children with fanciful tales even the kids know are fairy-stories.


Not a place where a child would be (allegedly) assaulted.


The court heard how Sister Leva was helping with a Sunday School class at St Patrick's Catholic church in Panmure in April of this year when the incident happened.


Apparently the children were practicing an action song to celebrate the 40th anniversary of a church leader when Sister Leva became pissed-off at a 9-year-old girl for doing the actions wrong.


The state prosecution alleges "She (Sister Leva) then went up to her and flicked her in the side of the head, causing her to feel dizzy,"


"She then twisted her arm up behind her back and the girl heard a click in her shoulder and neck."


The next day it was discovered the arm was fractured.


Leva-i-Fangalupe Fono, known as Sister Leva was charged with assaulting a child and injuring with intent.


Sister Leva wore a cross in court and has the support of her church.


Let’s be honest here, the nun could have chopped-up the entire class, boiled them, eaten them and she’d still have the support of her church.

Posted by Canterbury Atheists at 5:55 AM No comments: 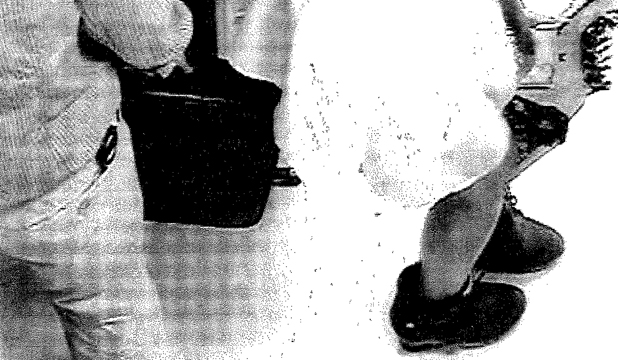 Per the Police and Court record a convicted Wellington man had 1400 recordings from up the skirts of women or of them undressed in bathrooms without their knowledge.
The man, 36, has suppression on his name preventing him being identified and that of his targets.
To put his crimes in scale N.Z Police found recordings of 180 victims.
Sicko altered a laptop bag to hide a camera, tailing groups of schoolgirls in Lambton Quay and around Wellington's central business district. He would manoeuvre the camera to film shots up their skirts, sometimes following them into food and clothing stores.
Shooting up-skirts was his lunchtime hobby from the drudgery at Internal Affairs.

Above is a CCTV image of him ‘in action’.
Amongst his array of visual victims were female colleagues from his church as they went around talking to people in their homes or during church meetings.
Now which church goes door to door I ask you?
The Jehovah Witness’s that’s who.
Posted by Canterbury Atheists at 8:16 AM No comments:

Atheism is the path to Global Peace


The Global Peace Index is out for 2013.
Once again there is a direct correlation between religious belief as it relates to freedoms, stability, crime and propensity to undertake aggressive acts.


All the top 10 countries, proudly including New Zealand, are secular states with high numbers of non-believers.


The more theists one has as neigbours the greater the chance you have for finishing near bottom on the GPI, having a bunker in your backyard and barbed-wire fences surrounding your house.


In short, the more religious a country is the lower down the list it will find likely itself.


Any arguments poorer countries are disadvantaged evaporate when you spot the United States of America down in 100th position.


Frankly the GPI speaks volumes about the adverse role religion plays on this planet.
Posted by Canterbury Atheists at 1:27 PM No comments:

New Zealands Anti 1080 Campaigners are out of control


Lacing dog food with 1080 in the prospect some unsuspecting dog owner will be walking his dog through a forest and then the poor animal will be enticed to eat the poison laden ‘treat’. Then hoping the angry, aggrieved owner will become a cause-celeb, attack the use of 1080 and attract public sympathy.


Often this occurs when the pet eats a dead animal like an opossum that has been killed by the pest-control poison.


But to deliberately target pets to make capital for their cause is despicable.


Bereaved dog owners who have been venting their spleen at D.O.C, local Councils may need to think again. The death of their dog may not have been a tragic accident but a deliberate act by Anti 1080 Campaigners.


The logic of anti 1080 zealots going down this radical line defies comprehension.


On one hand they claim to want save native birds, wildlife but in the next breath they are happy killing the beloved Kiwi family pet.


Moving on from this there’s the even more sinister tactic being employed by Anti 1080 radicals that of spreading the rat poison talon, another of their beefs, in public toilets.


What are they hoping to achieve here?


An inquisitive child takes ‘the bait’?


I remember once having a debate with a bloke in a tramping-hut about the use of 1080. I appreciated, took-in the anti-1080 brigaders arguments against its use but when I asked “What is a viable alternative?” all I got was procrastination.


If only these 1080 Campaigners would divert their energies to finding an alternative.


Finding an alternative is the solution - not baiting dogs and toddlers.

Posted by Canterbury Atheists at 11:06 AM No comments: