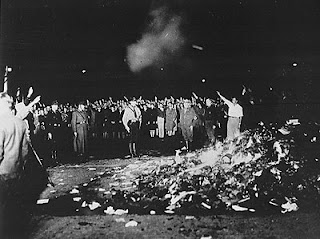 Hold-on one second - I’m just going to have to pinch myself.

English is still my, first language and I’m not living in Nazi Germany in 1937.

Still, it was relatively easy to confuse the two eras, when we read of attempts by Christians in Christchurch to stifle sales of renowned children’s author, Margaret Mahy’s new book ‘Awesome Aotearoa, History of New Zealand’. 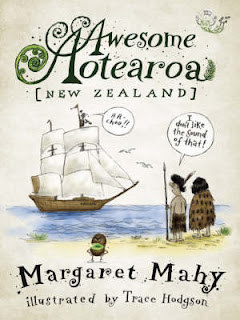 One look at the cover indicates it is ‘a tongue in check’ book of the countries history and Mahy and cartoonist/illustrator Trace Hodson makes no bones about poking fun, at all sorts of New Zealand institutions.

The object of the irreverent book was to make history fun for youngsters, but ‘thin-skinned’ Christians don’t see it that way, and labeled it ‘disrespectful’ and are doing their best to show their distain during Mahys promotional tour.

An example of this underlying humour in its pages, is Captain James Cook's discovery of New Zealand - which is described by Mahy as having been unwise, considering he landed on island full of cannibals with a name like ‘Cook’.

This is a quirky tale, illustrated with cartoons aimed at readers aged 6 to 10 – not the Satanic Bible for Kiwi Children.

What a sad bunch Christians are in this country, when they act in this bigoted and immature fashion, over a harmless children’s book of all things.

Posted by Canterbury Atheists at 11:10 AM

What a brilliant advertisement for the book... and an own-goal. I'm going to seek it out