The Vatican Bank: How the Catholic Church helps fund its daily activities with tainted drug-money and Nazi booty 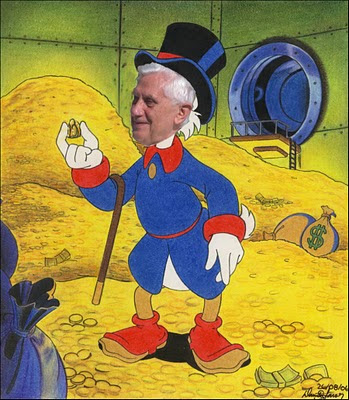 The outward vestiges of Catholicism’s wealth and immortality is; The Vatican Bank.

The Vatican Bank is not a bank in the same terms that define first-tare global financial institutions, such as the one you and I hold accounts at.

This bank operates at a level that would make an Internet finance company in the Bahamas with a P.O Box for an address, look like The Bank of England.

That is to say The Vatican Bank functions in the global financial under-belly, well outside the controls of normal EU/U.S regulations, governmental controls and more importantly for 'Gods bankers' as far away from ‘the grasp of the law’ as possible.

Those holding an account at The Vatican Bank fall loosely into three categories (a.) Catholic Churches and clergy (b.) Criminals (c.) Tax Evaders.

Which depositor is which, is frankly hard to tell.
Over the years many a regulator and media-commentator has wanted to know “who is actually running the bank - it's biggest clients, The Mafia or The Catholic Church itself?

When it comes to symbiotics like The Vatican Church and Italian Mafia, a quick look at historic-record shows the line between both groups is some-what blurred.

The Vatican Bank was formed in the middle of WW2 and made its initial wealth by accepting tainted funds from the deceased bank accounts & riches of Europe’s Jewish population, acquiesced by corrupt regimes - such as the one that gave the Vatican the very statehood it now uses to avoid prosecution and act beyond international law. The relatives of the Holocaust victims are still trying to recover those stolen ‘blood’ monies six decades later.

Money laundering still remains the main ‘money-making’ activity of The Institute for Works of Religion (the banks technical name) to this day. This week we learnt its current head, not for the first time in its sordid history, has just been caught-out by Italian officials for what is by their terms is a paltry 20 million Euros of illegal transactions.

As a financial institution that will take monies ‘no questions asked’ operating with the luxury of having a board which has immunity from prosecution, and no need to open its books to public scrutiny, The Vatican Bank has been and always will be the bank of choice to the criminal underworld as well as your run-of-the-mill despotic regime. Catholic dictators Pinochet's and Noriega knew full-well where to safely place their ill-gotten gains. They left it amongst comrades in faith. Hopefully they got a discounted rate.

Criminal fraternity’s ranging from the local Sicilian mafia, right through to Central & South American drug syndicates, also have accounts with The Vatican Bank, much to the chagrin of global law enforcement who are powerless to seize the profits of their criminal enterprise once it goes into the same vaults which still holds Nazi gold and valuables stolen literally in some cases from the corpses of Holocaust victims.

It is on public-record The Vatican Banks ‘cut’ on the Gambino crime-families drug-money was a straight 50% - so ‘laundering’ is a very profitable business for The Institute for Works of Religion and ultimately the Catholic Church - it’s sole shareholder and benefactor from its secretive venal activities.

If you wanted to 'knock a hole' in the worlds illicit drug trade and organised crime the biggest single-thing any government/policing-organisation could do -would be to dissemble The Vatican Bank.
The Vatican Bank (read: Catholic Church) aids and abets global money laundering on a massive scale and remains an integral part of the multi-billion dollars international drug trade, acts with impunity as a ‘financial life-raft’ for corrupt dictatorships and happily deals with any criminal desperado & tax dodger with money to hide from their respective authorities.

It’s hardly surprising The Vatican Bank gets caught-out now and again given its modus-operandi, scale of corrupt activities, dubious nature of its clientele and total lack of scruples of the people involved – especially its head.

Try picturing RATzinger acting like a crazed ecumenical Scrooge McPope, divested of robes and running naked deep-within the bowels (now there's an appropriate turn of phrase if ever there was one) of the cavernous church vaults. Squealing in proverbial joy as those tainted 'pieces of silver' run through his grubbied fingers and dribbling in anticipation as his favourite choir-boy climbs al naturale up to join-him on-top-of the mountains of illicit loot not even L.Ron Hubbard could place one of his enormous figures on. Becoming erect when he finds a gold-bar embossed with a Nazi swastika amongst the money-mountain.

Posted by Canterbury Atheists at 3:05 PM