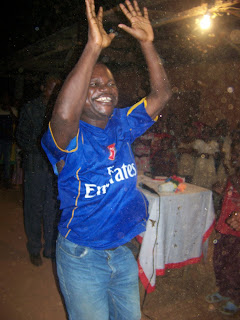 ['The Joy of Jesus in Your Life' - World Vision at work in Uganda]
“Christian witness is an essential and integral part of the mission of World Vision. Christian witness should never involve the use of pressure or inducement but equally it is unethical and inappropriate to hide that Christian teaching is the underlying motive for all of World Vision’s work”
Would it alarm you to know World Vision only employs Christians or believers in The Old Testament God? Indeed if you sign-on as an employee to World Vision and then, either by the act of apostasy, or simply losing your faith altogether – you are automatically fired. World Vision in effect practices religious discrimination. Atheists are amongst those unwelcome in their ranks.
Would you continue to support World Vision knowing it funds Christian Schools and religious-education programmes and that World Vision and sees the distribution of bibles as being as integral & intrinsic part of their activities as food-aid? 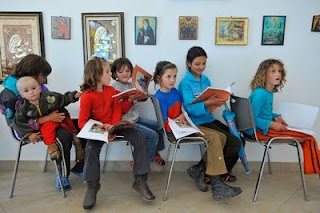 World Vision in-action Bibles for Albanian kids who according to WV’s Magazine “(a country) that struggled to provide spiritual education for young Christians after the fall of communism due to a dearth of learning materials.”
Did you know World Vision is considered by U.S Courts to be, in legal terms: a ‘Religious Corporation?’ and further a religious group first and an aid-group second?
Does it make you uncomfortable knowing the CEO of World Vision has an income twice that of New Zealand’s prime-minister?
World Vision doesn’t like to promote its Christian evangelism here in New Zealand, least it scares away potential supporters, but it is all there on their web site if you care to look in the fine-print:
“We co-operate with local church leadership. This must be appropriate in the context of the programme. The families in these communities are given an opportunity for Christian education appropriate to their own culture but it's their choice to participate”
Now, picture a starving person saying “no thanks” to a Bible lesson when the person undertaking the proselytising is the same-one distributing the food & shelter for you and your family? This isn’t just a captured market – it is one that would worship Spike Milligan if it meant filling their bellies.
World Vision rejects the exploitation tag trying to get the public to believe its own company line that:
“World Vision affirms and defends the right of all Christians and faith-based organisations, including our own staff and World Vision itself, to witness through their lives, words and deeds”
“Accepting Christ must be a free decision based on consideration and judgment”
Starving beggars can in-fact be choosers in World Visions opinion.
World Vision.com is even more forth-right in letting the public know where a part of their donations are going and also give-us an insight into their DNA make-up:
“Mankind has a spiritual dimension that also needs to be addressed. World Vision works with local partners, including churches, to organise summer camps, religious celebrations, including Christmas and Easter and the distribution of children's study literature on the Bible, church traditions and history, to nurture this dimension. We support local churches as part of the community to help them carry out these activities in the longer term”
So long-after the disaster, well after the village has got on its feet and the population has the ability to feed themselves again - World Vision remains on the ground simply to propagate the teachings of Jesus Christ – using the money secular-suckers gave thinking it was for food, water and housing etc – all teary the stuff that features on the adverts.
In the majority of cases, those that sponsor a child with World Vision are paying for that child to learn about Noah and his Ark and Jonah and The Whale. 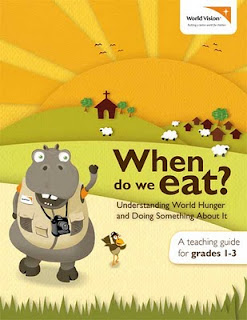 World Vision even has enough money from donors to publish its own Christian propaganda for its in-house (re)education programmes.
This book (above) is advertised on World Vision Resources as being ‘designed so leaders can integrate individual parts into a regular Sunday school or Bible class curriculum or use an entire lesson to fill a full class hour’. I mean why bother filling a child’s mind with math’s and science, eh?
Being a multi-national religious corporate with 40,000 employees World Vision even runs the equivalent of its own Travel Department.
Rest easy knowing your monthly donation has gone to help WV workers get a bit of well needed R&R with a travel-package entitled “Leadership of the Holy Land Tour”. Apparently it includes all ‘the’ great Biblical sites. According to none other than “Steve Haas (VP & Chief Catalyst, for World Vision and I’m bemused as you are at the title) The holiday in The Middle East is “An encounter that will stretch and provide you with insights on how to lead your church more effectively. It will also provide a life-line to those of our Christian family that remain in this turbulent region of the world.” Don’t worry if The Middle East isn’t your thing – there's plenty of other tours available to a whole range of countries. Chile appears popular.
In Summary:
Whatever you do - don’t give World Vision one cent!
Don’t feel a shred of guilt ignoring their ‘heart-string’ adverts, safe in the knowledge you are not helping prop-up their CEO’s base-salary of NZD 500,000 per annum – plus bonus’s. These bonus’s bump-him-up another NZD 150,000 by the way. How many Child Sponsorships will NZD 650,000 get ya I wonder? Its head in Australia, a Baptist minister, gets a base salary of a cool AUD 250,000 – plus again the obligatory bonus’s. This-is after-all an American religious corporation first, and pays its executives well.
Just as importantly make-sure your child’s school does-not participate in their fashionable money-maker called ’The 40 Hour Famine’. Write to your school board and say it is wrong to raise funds for a multi-national religious corporation that shamelessly discriminates against non-Christians.

Posted by Canterbury Atheists at 8:03 AM

are you saying that world vision should stop helping children in need they inploy christans because it is a cristan organisation NOT GOVERNMENT and in the bible it says to love your naber and love god and if you do not love your naber and love god actvly (phisicly helping people in need) then how can you call your self a cristan and if you stoped loving your naber wall you worked in world vishon then how can they consider you a cristan and that is why you were fierd. i'm not serprised that there are no coments on thisblog "Comment moderation has been enabled. All comments must be approved by the blog author." i dont care if you dont put this throught just reed it