New Zealand Children who Died for their Parents Beliefs

I recommend you play the You Tube verion of Tears for Fears song ‘Mad World’ (below) as you come to terms with the futility contained in the the cases below. The lyrics from the haunting song, made famous in the movie Donnie Darko, seem to echo the sad, senselessness, when extreme faith overcomes reason. When a child dies, needlessly for their parents beliefs.

Caleb Moorehead died aged 6 months in March of 2002 from a pneumonia after his parents took him out of hospital against medical advice, the end result of something as simple as vitamin B12 deficiency caused by being breastfed by his vegan mother.His deeply devout S 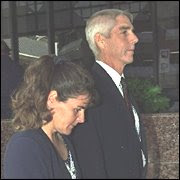 eventh Day Adventist mother & father , ignored all advice, including that from family friend, Catherine Curtis-Rangihau, who as a social worker repeatedly told the couple Caleb would die, unless proper medical care was continued. Deborah and Jan Moorehead (right) instead, prefered to pray instead calling the illness ‘a test from God’ and treat their young son with herbal remidies.They ignored the fact the poor child teeth had worn a groove through his tongue The parents received five years jail each for manslaughter. Seemingly oblivious a baby had died due to the couple following their teachings ‘to the letter’ The New Zealand Seventh Day Adventist spokesman told the media outside the Auckland High Court , glibbly “people in many countries take genuine beliefs to the point where they end up causing harm”. Deborah’s sister, also a fellow Seventh Day Adventist sad she had done the right thing by denying her nephew the necessities of life. The Police spokesman called it “a tragic case where the Moorheads chose their faith over their son's life".


Liam Williams Holloway, developed neuroblastoma, an aggressive childhood cancer that stands a better than even chance of being cured, if treated early enough. The odds given for survival, via a series of chemotherapy, were given to his parents as 60 to 70%, but this rate drops significantly as the cancer takes hold. Liam was given just one course of chemotheraphy at Dunedin Hospital, but his parents who followed various New Age beliefs, withdrew him from treatment to seek alternative therapies.His doctors went to court and got an order to have Liam treated. His parents went into hiding, as best it was possible to hide from a insatiable & sympathetic media scrum, who sided with the parents rights to seek alternative therapies over proven medicine. Liam’s parents borrowed money and mortgaged their house, solicited public donations and took him to a quack clinic in Tijuana, Mexico – where he died at age of six. Liams parents were never charged.


Whilst most of the media where chasing the Williams-Holliways from hide-away to hide-away, in 1999 a similar case was going-on in Auckland. Tovia Laufau, a 13-year-old Samoan boy, was dying of a cancerous growth on his knee that doctors said at the time could be treated with some confidence. Middlemore Hospital told Mr and Mrs Lafau, Tovia had a 60-70% chance of full recovery; but without it he would die. But his parents, like Liam’s, did not believe in doctors, they prefered to leave the cure in Gods hands. Even when the tumour grew to the size of a basket-ball the parents continued to spurn medical treatment, with the support of their Church . The post mortem, listed the weight of the tumour as 13kgs so it must have been an appaling sight, with horendous discharges, greeting anyone surrounding the pain-ridden Tovia. The defiant and unrepentent parents , Peni and Faafetai Laufau were found guilty of failing to provide the necessaries of life for their teenage son, a charge carries a maximum sentence of seven years imprisonment. However, they received a 15- month ‘suspended sentence’ and walked free from the court. At the trial Tovia's former primary school principal, Russell Burt, has told the court the Laufaus were people who looked after their children and did their very best for them.

In 2003, Catherine and David Tribble's four month old son Caleb died of septicaemia caused by an undiagnosed kidney infection. Like the Lautau’s Caleb Tribble’s parents shunned modern medicine due to their deep-seated Christian beliefs . At the time of Caleb's death, David and Catherine Tribble were caring for eight children under the age of nine on their remote farm outside Whang 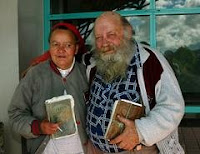 arei. The Tribble’s philosophy was ‘God will provide’. Following the death of their son, the couple faced a trial for manslaughter, but were found not guilty on that charge, but guilty on the lesser charge of endangering the baby by failing to provide him with the necessities of life. The Whangarei court heard that on the day Caleb before died a District Health Nurse visited the Tribble’s and pleaded with the couple to seek medical help, but instead of taking their seriously ill child to a doctor, they opted to contact David's father John to lead them in prayer session for Caleb's recovery. During cross-examination the jury heard from David that “doctors could curse people by misdiagnosing them with an illness” and that his father had the ability via God to cure broken bones instantly. That’s John and his wife above (Caleb’s grand-parents) clutching their bibles in the photo to the left, taken outside the court.
Posted by Canterbury Atheists at 1:55 PM

I think the appropriate description is insane! Unfortunately for the kids their parents didn't argue they believed in a 100 foot tall, tap-dancing banana, that would cure their kids. If they had, the kids would probably still be alive, with authorities removing them from the care of the crazy banana worshiping people.