There’s a long-rich history of sexual deviants becoming Popes – so what’s so strange about another one? 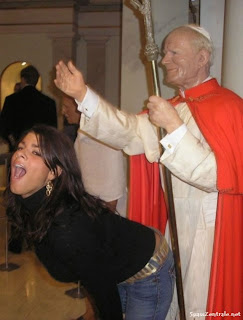 Sergius III (? – 911) murdered his predecessor to come to power, defiled his corpse, fathered an an illegitimate son to his mistress who was 14 at the time, and then ensured it was his bastard son that would take his pontificate upon his death.

Pope John XII (937 – 964) was another one who liked ‘keeping it in the family’ – his niece fathered one of his brats. Once personally castrated one of his subdeacons and then cut the rest of him up.

Pope John XIII (965-72) was, for the most part, an embarrassment to the Roman Catholic Church and remains so even to this day. He was a randy geezer – so much so that he converted The Latern Palace into a brothel. Was known to prey-on female pilgrims to St. Peter's. It was John Paul XIII stray-rooting that lead to his untimely demise. An irate husband who came home to find his wife in bed with the pontiff took the matter into his own hands and stabbed him to death!

As usual as his death may appear, he wasn’t the first Pope to die in the act of sexual congress.

Pope Benedict IX (c. 1012 – 1065/85) had an incestuous relationship with his cousin and then sold the papacy to his own godfather because he was sick of the job.

Pope Clement VI (1291-1352) watched two thirds of his congregation die of the plague ravaging Europe who blamed The Jews for the outbreaks origins. Clement didn’t mind admitting he was “a sinner amongst sinners” which he was - on a scale with no parallel in its day. He and his cardinals use to dine with their harem of prostitutes in what were called "Banquets of the Walnuts". After the meal, the gathered Cardinals had all of the prostitutes who had dined with them disrobe. Then a bucket of walnuts was scattered across the floor and the women ordered to pick them up, on hands and knees, the better for the Cardinals to see and choose from among the vulvas present for their carnal pleasure His lavish spending almost bankrupted the church.

Pope Julius III (1555 odd) Julius discovered a 13 year old beggar called Innocenzo on the streets of Parma before ascending to the pontificate, and he adopted him as his own nephew. Innocenzo openly slept in the same bed as Julius and boasted of the boy's prowess.

So what we currently have another rat-bag wearing the fishermans-ring?

Benedict XVI has a long illustrious list of predecessor to look-up-to.
He's just learning-his-trade.
Posted by Canterbury Atheists at 2:46 PM

All based on using their own values against them to find heresy on them?
IRONY.

Yeah, popes really preach incest and rape, murder, and genocide, just like the bible.
Cause if someone believes in something like that being truly to their advantage of becoming POPE they will use it to their optimal performance in society.
Enough said, that's just stupid to incinuate such a grandualized history of nothing but "popes" and call it "the long history of sexual deviants" cause its called polemics.